Book Review by badshah.net: Islam in Victorian Britain: The Life and Times of Abdullah Quilliam by Ron Geaves PART 2

Quilliam was a true ambassador for Islam, actively lecturing on comparative religion and implementing within the laws of Britain an Islamic community, masjid, school, orphanage, even a portion in the grave yard for those who died with the 'truth'. Along with the equivalent of open days. The local community (regardless of religion) where invited to celebrate and eat at the Eid festivities with the Muslims. Providing breakfast for the poor Christian children on Christmas day is another act of charity and community building Quilliam not only orchestrated but in the majority of theses works heavily funded from his own pocket. He was the first point of contact from dock workers right up to the mayor on all matters concerning the Muslims in and around Liverpool.
I will touch on what could be seen as a negative chapter in Quilliam’s life. His taking on of a new identity in the later years of his live. Much controversy surrounds this section of his life and I feel the author has done well to shed as much light as was possible with the information available to him.
I'd recommend this book to anyone interested in the 'British Muslim' area of politics, sociology, and community cohesion. It's also a great read for those having an interest in the British Empire around this era (1900’s). For me it's been a ‘how to’ guide on becoming a 'Great British Muslim'. I shall attempt to put into practice the lessons learnt from reading about Quilliam's life.
Posted by Unknown at 02:38 No comments:

Book Review by badshah.net: Islam in Victorian Britain: The Life and Times of Abdullah Quilliam by Ron Geaves 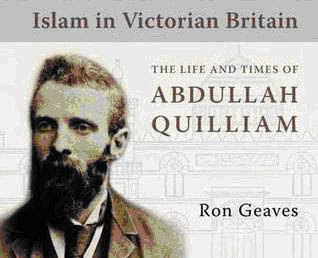 Abdullah Quilliam was a giant of a man by any standards. He was the quintessential Victorian British gentlemen. Solicitor by profession, defender of human rights, orator and lecturer on geology and numerous other sciences and an advocate for sobriety at a time when the consumption of alcohol far out weighted today's levels. This was the man even before Islam. After his return form North Africa where he embraces Islam he grows vastly over the following years, and becomes the leader of a multi cultural community of Muslims (both born and British converts, over 200 in number) from all walks of life in Liverpool (the main international dock of the British Empire at the time), along with heading a Muslim school and orphanage he is titled the Sheikh-ul-Islam of Britain by non other then the Sultan of the Ottoman Empire (Abdul Hamid II). No other Muslim has and in all likeliness (due to the lack of an Islamic state) will ever be given such an honour.
I first heard about Abdullah Quilliam many years ago in passing conversation, and was intrigued, and when I saw this autobiography, I had to read about this interesting character. For me the pull towards this great personality was the fact that he was a proud Brit, but above all a Muslim. And I wanted to see what this 1900's gentleman a true British Muslim in every sense of the term balanced his loyalties to Queen and country, and by his own compulsion the 'True Faith' (as Quilliam often referred).  While the biography starts a tad text book like I feel this section is important as it lays the settings in which these events in the Sheikh's life are occurring. Victorian Britain during the industrial revolution was the centre of a vast Empire which had colonies across the globes and a greater number Muslim subjects then the Ottomans had. The emerging might of the Russian region, Germany, France and her colonies, as well as the established Ottoman empire all tragically manoeuvring in what eventually where to become the alliances of the first World War. International snapshot of history covered. We move onto at this time which was a hub of immigration from Muslim lands and closer to home. (, , & ) and had its own religious conflicts before Islam enters the equation as the conflicts between Catholics and Protestants often erupting into violence.
But the book after a slow start gets to the main course. Abdullah Quilliam the man, the ideals and his experiences. Most interesting and influential for me being the challenges he often but not always overcame with the duality of being a British Muslim, and these are truly the insights I fell the majority of British Muslims (Muslims in Britain regardless of race, country/ religion of birth, social class) can learn a great deal from.
Click here for the rest of the review
Posted by Unknown at 06:26 No comments:

Easy Life of Hamza the Cat

What a life a well looked after domestic cat has. The best of both worlds. Food and drink provided for, come and go as you please. Fussed over, groomed and adored. Here's Hamza a stray my uncle brought back mistaking him for our lost cat Gorgeous George. He's been with us ever since.
Posted by Unknown at 13:44 No comments:

Google's web based reader allows you to enter the web addresses of all the blogs you want to keep up to date on. It saves you having to revisit blogs only to find nothing new has been added. All the blogs I'm interested in, all in one place. Saves time, you gotta love saving time.

You'll need a Google/ Gmail login, add away and manage your subscriptions via the option in the bottom left corner of the reader.

Some blog addresses to get you started on your subscriptions.

Google Reader can also be used to subscribe to news feeds & RSS feeds here's what Wiki states about Google Reader
Posted by Unknown at 17:48 No comments:

Back in 2009, I stumbled upon the Anthony Nolan Trust. This charity is responsible for maintaining a donor register potential for bone marrow and stem cell matches. Back when I did it, it required a blood sample being taken and sent to the charity to add your details to their register. Now it's even easier, they simply take a cheek swab (just like in the crime dramas). If you're from the black or ethnic minority group then it'll be even more imperative you consider joining this list as the demand far out ways positive matches found for such groups.
Click here for the Anthony Nolan website/ application
Click here for my poor attempt to raise the money it costs to keep me on the register.
Posted by Unknown at 15:51 No comments: